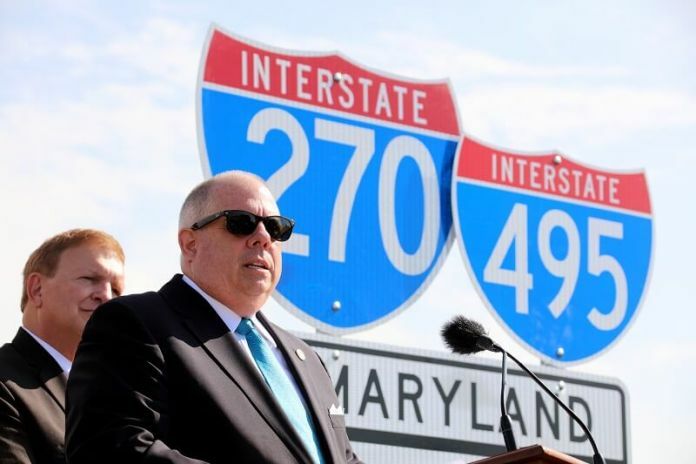 Two Montgomery County lawmakers suggested on Tuesday that an analysis of the state’s controversial Capital Beltway / I-270 proposal was being held up by senior transportation officials to make it harder to shut down the project.

Two Montgomery County lawmakers suggested on Tuesday that an analysis of the state’s controversial Capital Beltway / I-270 proposal was being held up by senior transportation officials to make it harder to shut down the project.

And a legislative budget analyst said Republican Gov. Lawrence J. Hogan’s oft-repeated claim – that the state lacks the resources to expand the two highways and replace the American Legion Bridge – has never been put to the test.

Their comments were made during a hearing held by two sub-committees of the General Assembly that oversee transport policy.

The legislature is in the middle of a 30-day window to consider a design contract the Maryland Department of Transportation signed with Accelerate Maryland Partners (AMP), a consortium led by Transurban and an Australian financier.

The $ 54 million deal is expected to be submitted to the Public Works Commission in the coming weeks.

A legislative analyst told lawmakers that the MDOT first promised a study, known as “value for money” analysis, in 2019, but did not follow through.

The agency again pledged to provide the study last month, Legislative Services Department analyst Matt Mickler told lawmakers, but only “in conjunction with … [a] final design plan for construction, financing and operation.

â€œThis would mean that we would receive the value-for-money analysis after entering into a phase developer agreementâ€ for the project, he said.

Mickler said the study would examine whether taxpayers would be better served by using public funding for the project or by continuing the public-private partnership program that Hogan unveiled in 2017.

“We will have an analysis to know if it is better for us to go with a private company for 50 to 100 years, compared to a public project as we have always done, after having already signed a contract with an entity. private to start working, â€said Salomon.

Transportation Secretary Greg Slater defended the state’s approach. He told lawmakers that having a final construction contract in hand would allow MDOT to make a more comprehensive comparison.

“Then we are able to do this value for money analysis by looking at a public option versus a ‘P3’ option – and that analysis will be provided to you with that deal,” he said.

Korman, chairman of the House supply subcommittee on transport and the environment, questioned “when and how useful it would be, at that time, to have a study of the value money “.

Hogan, who has 18 months left on his second term, is eager to sign contracts while in office.

His proposal has strong support from many transport and business advocates, who see it as a way to alleviate some of the country’s most congested roads without using taxpayer dollars.

But his plan was defeated by local planners and political leaders, public transport advocates and environmentalists.

Earlier this month, the National Capital Region Transportation Planning Board withdrew Plan I-495 / I-270 from a federal environmental scan that is needed for the “expressways” project to get the necessary funding.

In a note to lawmakers, key legislative analysts said the MDOT said a delay in reintegrating the project into the capital region’s transport plan “could cause the AMP to withdraw or reduce its offers the state … including the potential to build Phase 1 Southern Improvements at no cost to the state, the $ 145 million [development rights fee, a payment to the state], and other financial and environmental improvements.

Hogan’s funding request is in question

In the four years since he unveiled his plan to add variable-cost toll lanes on portions of I-495 and I-270, Hogan has insisted that Maryland lacks the capacity to fund the multibillion-dollar private sector project can do the job.

â€œThe private sector is not really funding any part of this project,â€ he said. â€œThey are funding this project, and they will be fully reimbursed over this 50-year period. The money needed for this project is therefore there, in the pockets of the toll users who will use this facility. “

McCulloch said the state could increase the Maryland Transportation Authority’s debt limit to help cover the cost of the project, but there would likely still be a gap between what the state would incur and what the investors would be able to finance.

He said the size of the gap is unknown because â€œthe analysis has not been doneâ€, or if so, it has not been made public and to the General Assembly.

â€œIf we fund this projectâ€¦ we would have to significantly increase the tolls with our existing facilities, as we would need to generate revenue to maintain [current] cover, â€she said.

Also, she said, as part of a P3, the developer assumes the risk that the tolls are not enough to reimburse investors. â€œIf the vehicles are not on the road, it is their risk,â€ she said. â€œIf MdTA financed it, the State would take this risk. “

“This uncertainty that exists would most likely reduce our credit rating,” added Sharpless.

The Public Works Council is made up of Hogan, Treasurer Nancy K. Kopp (D), a probable â€œnoâ€ vote, and Comptroller Peter VR Franchot (D), candidate for governor in 2022 and likely to vote.

A Franchot staff member monitored the tense four-hour hearing, a session that saw Korman, a lawyer, grill Slater and his team on a dozen aspects of the proposal.

Korman started the session by calling another high-profile P3, the half-built Purple Line, a “disaster”.

“The project is years behind schedule, disputes between the state and the contractor are rampant and we still don’t know the real cost of this project,” he said of the halfway light rail link. built between New Carrollton and Bethesda.

â€œPart of the problem was that the state and the contractor did not agree on the cost of the project and what had to be included before it started, and unfortunately we might be faced with a situation now where we know even less about the upcoming P3. “

In a briefing for lawmakers, Robert Puentes, director of the nonprofit Eno Center for Transportation, said public-private partnerships are often misinterpreted.

â€œThey appear to be presented either as a panacea for all of America’s infrastructure challenges or as a corporate takeover of public assets,â€ he said. “The reality is that they are neither of those things.”

PPPs are “rarely the cheapest way to acquire infrastructure,” Puentes told the panel. â€œBut a well-structured PPP can offer better value for public moneyâ€ because projects tend to be completed faster or with improved techniques.

He described Maryland’s P3 law, which was passed in 2013 to pave the way for the purple line, as “strong.”