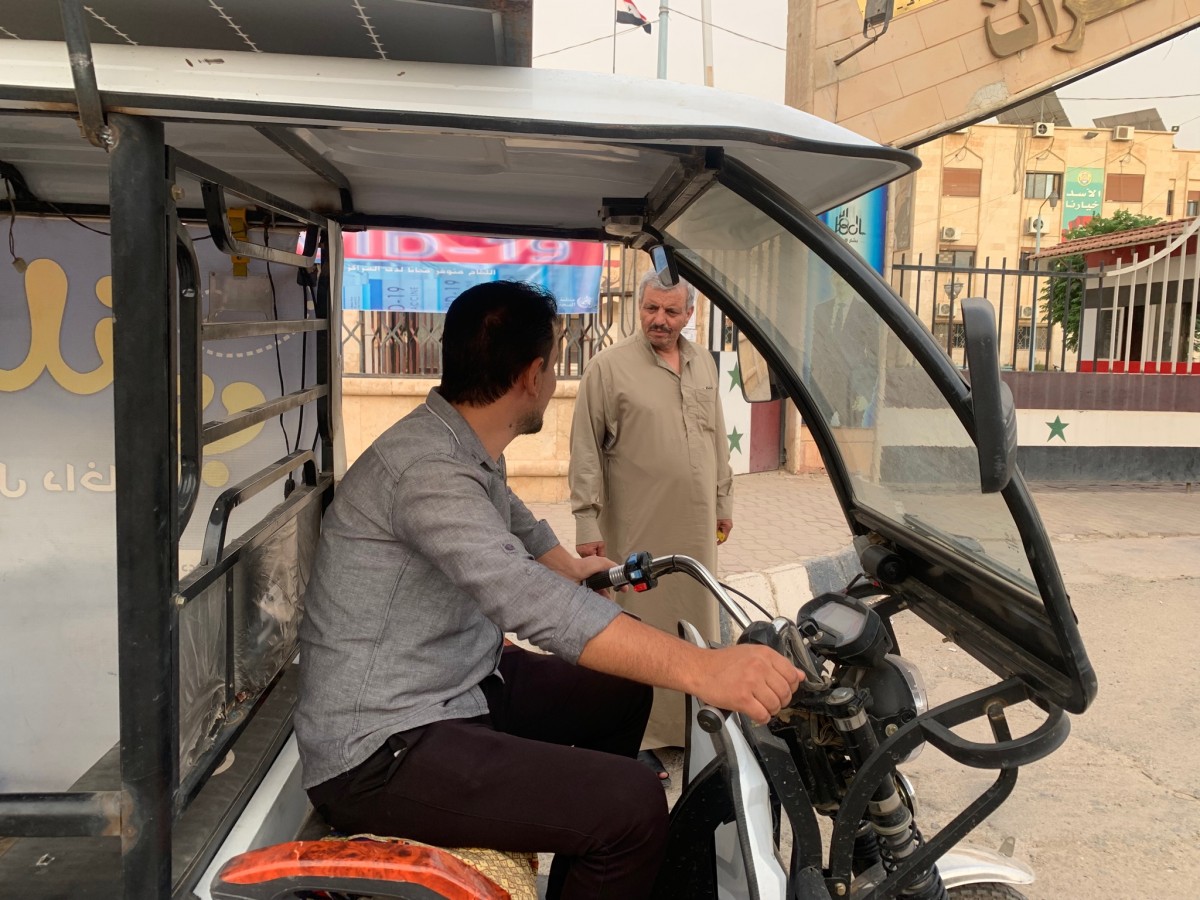 The electric tuk-tuks are a hit with university students, many of whom had stopped attending classes due to exorbitant taxi costs.

One morning in January, residents of the Syrian town of Deir el-Zour woke up to the extraterrestrial sight of two tuk-tuks wandering their streets, unexpectedly.

Although they have long flooded towns and villages in other parts of the Middle East, the arrival of these three-wheeled vehicles in this eastern Syrian city is timely. An acute energy crisis that forced many citizens to stop using gas-powered vehicles due to soaring costs prompted a young engineer to create electric vehicles as an affordable alternative for her community.

“The goal was to give city dwellers an option besides crowded buses that they waited hours to squeeze through – if they could – or taxis that became too expensive for most people,” says 26-year-old former engineer Doaa Al-Ibrahim, who created these two electric tuk-tuks.

A 2020 graduate of the local AlFourat University’s petrochemical engineering faculty, Al-Ibrahim has experienced her own part of battling the country’s fuel and transport crisis. After a background in business administration, Al-Ibrahim explains that the constant need for a cheap and safe means of transport pushed her to develop the electrically charged battery for vehicles.

Al-Ibrahim’s electric tuk-tuk project, called Wasalni (“Give ‘Me a Ride”), was an immediate hit, especially among university students, many of whom stopped attending classes due to the exorbitant taxi costs. Each tuk-tuk makes about 35 trips a day, often carrying three passengers each.

Wasalni charges a passenger about 500 Syrian pounds (less than 48 cents) for a journey that can take a maximum of 20 minutes – the time needed to get to either end of the eastern Syrian city in heavy traffic. normal. “The same journey would cost, on average, around 3,500 pounds – around $1 – in a regular taxi, or an endless wait for a slot on public transport,” she explains.

This is a high price in a country where the monthly salary of a citizen does not exceed $40 and more than 90% of the population lives below the poverty line. As inflation rates continue to climb, hitting a three-decade high in March, two-thirds of the population are expected to face food shortages this year.

Years of violence that have destroyed the economy and stripped the government of its control over major oil fields, compounded by Caesar’s Law sanctions prevented Damascus from providing enough fuel for domestic use, prompting it to remove subsidies on various energy products. Prices for the subsidized Octane 90 have risen from 450 pounds per liter at the start of 2021 to 1100 liras at the end of the year, while the unsubsidized version has seen its price rise by more than 280% over the same period.

Simultaneously, the Syrian pound has lost its value considerably,”hitting an all-time low” of 4,760 pounds to the dollar in March 2021, according to a June report from the United Nations Office for the Coordination of Humanitarian Affairs. “Despite rebounding and averaging 3,500 pounds to the dollar in the final months of the year, commodity prices rose sharply,” the report said.

The impact of these two economic developments on Syrians has been the hardest since the conflict erupted more than a decade ago. Transportation has been hit hard.

Alaa Al-Abd, one of several university students who have become Wasalni’s most regular customers, said getting around has been difficult.

“I was often late for my classes, I even missed several because I waited hours for a bus that I can get on,” she says. “These tuk-tuks are much more comfortable, much more reliable, faster and overall safer. This has been my commute every morning and back for months.”

Ghasan AlMohammed, a nursing student who is one of two young drivers to use the vehicles, says it was curiosity that first prompted people to try out the tuk-tuks and see how they navigated in the narrowest alleys and the bumpiest roads.

“They were unfamiliar to the locals, but they immediately understood what a more affordable ride it was than taxis, and a simpler and more dignified mode of transportation than overcrowded buses.”

The driver answers a phone call from a regular customer as he drops off another. “I’ll be there in a minute,” AlMohammed replies briefly before steering the compact vehicle to its new destination, navigating roads often lined with remnants of war-torn buildings. On a very calm day, he says, he makes as many as 10 disembarkations, some with three passengers at a time, which mostly occur in the early hours of the morning as he takes passengers to their university classes or their work.

Odai AlHadrawi, a civil servant, says he shares one of these tuk-tuks with a colleague every morning to get to the office on time. “They are a real blessing and a real savior from a transport crisis that has worn us down,” he says. “I can now afford to move around the city and also buy essentials for his family.”

Al-Ibrahim said she had the five-seater vehicles manufactured locally to circumvent sanctions that would have made importing them both impossible and expensive. To secure the funding, she pitched the idea of ​​electricity-charged tuk-tuks to the UNDP Youth Empowerment Project in mid-December and received $2,500 to fund the project. But in order to run an engine that relies on electrical power rather than fuel, she added the equivalent of $1,000 out of her own pocket to make it happen.

“Since then, the motors have been modified to allow it to be partially solar powered as well, making it not only more efficient but also environmentally friendly,” she says..

Solar panels, she noted, help overcome common, hour-long problems power outages. Power plants destroyed by the war have prompted the state to ration power supply as it strives to provide a constant flow of electricity that meets local needs.

“As in much of Syria, the city receives two hours of electricity for every four hours of outage, which means that a tuk-tuk’s battery takes up to 10 hours to recharge – which is done at night – to be able to run for nine hours straight during the day, at a speed of 40 kilometers per hour,” she explains.

Wasalni’s challenges don’t end there. Al-Ibrahim says Deir el-Zour mechanics’ unfamiliarity with vehicles, or with custom motors powered by electricity and the sun, means that in the event a tuk-tuk breaks down, it must be taken away to Damascus or Homs, a distance of 450 or 360 kilometers respectively, for it to be repaired. “It can take days or weeks,” she says.

But for users who have become addicted to these tuk-tuks, these challenges go unnoticed. Noor Al-Atallah, a high school science teacher, says she advises her students to try out these vehicles whenever they arrive late for class. “It’s my go-to option for getting to work or running errands. They are like a taxi for the poor,” she says.

This article was published in collaboration with Egab.

Safaa Sallal is a journalist in Deir el-Zour, Syria.